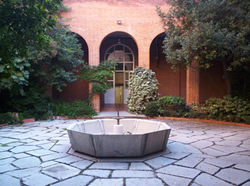 The "Instituto de Física Fundamental" was created on 29-05-1992, following a process similar to the one underwent by the Instituto de Estructura de la Materia, from which a great part of our institute came. It comprised several research groups whose common interests required an appropriate frame. It also served as the natural environment for other groups from different origins in similar situations.The institute forms part of the "Centro de Física Miguel Antonio Catalán" whose creation was made possible by an agreement reached by the active participation of the three institutes involved. During this time, the institute kept an extensive and productive network of collaborations with university groups, becoming three of them the current associated units.

Collections in this community

1.0 2.0 atom
Method for optimizing a computing process in a classical binary processor
Tips for Students on How to Perform a Successful and Efficient Research
Sensing the ortho Positions in C6Cl6 and C6H4Cl2 from Cl2− Formation upon Molecular Reduction
Quantum Information and Quantum Optics with Superconducting Circuits
Ultrastrong capacitive and inductive couplings of flux qubits