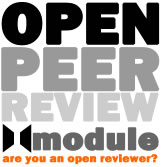 With the support of OpenAIRE, the researcher organization Open Scholar has coordinated a consortium of 5 partners to develop the first Open Peer Review Module (OPRM) for open access repositories. DIGITAL.CSIC participates as one of the 2 repositories to test the pilot module. The OPRM envisions the gradual conversion of existing repositories into fully-functional evaluation platforms. It allows an unlimited number of reviewers to evaluate any research work available in DIGITAL.CSIC (preprints, published articles, presentations, conference outputs, datasets, book chapters and books, working papers...). In its current version, reviewers will be invited through the system (i.e, following an author’s request) and at a later stage it is foreseen that any researcher, CSIC-affiliated or from other institution, may volunteer to review any object of the repository. In both cases, reviewers will receive the request by email and will be asked to complete their review on the repository platform. The review generates a new item on the repository, which is under a Creative Commons CC-BY license, linked to the original research work and openly accessible and citable. The OPRM also includes an annotation subsystem which adds an inter-reviewer-level by allowing reviewers to comment other reviews on the same research object. Only constructive comments will be accepted and the system will not allow for the publication of offensive or non-scientific contributions. Τhe OPRM module displays the name and affiliation of the reviewer and in addition to reviewing research works, the reviewer will be able to evaluate other reviews of the same work. Similar to the reputation of authors functionality, the OPRM reputation assessment model considers that if a reviewer produces `good' reviews, then the reviewer is considered to be a `reputed' reviewer.

The module has been built by DSpace provider ARVO and developed as an extension of DSpace workflow and submission capabilities. The reputation algorithms were developed as separate plugins, allowing their easy adaptation to other reputation models. The reputation assessment model by the CSIC Artificial Intelligence Research Institute (IIIA) is based on peers evaluating not only each other’s research works but also each other’s reviews. A full explanation about the reputation algorithms is available at the paper Reputation at the Academic World. (http://digital.csic.es/handle/10261/130842)

Public launch of the OPRM Project