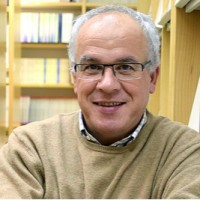 Firma en Digital.CSIC (*)
Mellado, Mario
Centro o Instituto
CSIC - Centro Nacional de Biotecnología (CNB)
Departamento
Inmunología y Oncología
Especialización
The chemokines are a family of chemoattractant mediators with strong pharmacological interest, they bind to GPCR receptors and direct cell movement. They are essential for immune system homeostasis and key proteins in multiple inflammatory and autoimmune diseases such as rheumatoid arthritis, multiple sclerosis, ulcerative colitis, Crohn’s disease, etc. They have also been linked to HIV-1 infection, tumor metastasis and transplant rejection. After an initial stage studying the signaling cascades triggered by chemokines, he described, for the first time, that these inflammatory mediators activate the JAK/STAT pathway, a signaling pathway classically associated to the cytokine receptors. He also was pioneer describing that chemokine receptors form homo- and heterodimers at the cell surface. At that time, he published more than 50 manuscripts, signed 4 international patents and supervised 4 doctoral theses. In 2005, he obtained a permanent scientific position in the Spanish Research Council (CSIC) and stabilized his position as a group leader in the CNB. He consolidated his research on chemokines and incorporated new innovative imaging technologies, such as those based in resonant energy transfer (FRET and BRET). Using these techniques, he confirmed the existence of chemokine receptor complexes even in the absence of ligands and demonstrated that homo- and heterodimers were dynamic conformations regulated by receptor expression and ligand binding. At this stage, he supervised 8 doctoral theses and became interested in translational aspects of his research. He participated in 2 european consortia supported by the UE FP7 programme that facilitated an international development of his research. He also participated in 2 national consortia on rheumatic diseases, bringing his research closer to clinical and translational medicine. His commitment to incorporate new technologies in his research, led him to start working with TIRF techniques (total internal reflection microscopy) and super-resolution microscopy (STED). Now he uses these methodologies to analyze the spatial distribution and dynamics of the chemokine receptors in the cell membrane, as well as to identify those factors involved in their regulation. He is also interested in the dynamics of the signaling molecules associated to these receptors, as well as in the identification of potential targets and tools with therapeutic value to intervene in chemokine function. Currently he is also director of the CNB/CSIC.
Email
mmellado@cnb.csic.es
ORCID
0000-0001-6325-1630
WoS ResearcherID - Publons
M-9893-2014
Scopus AuthorID
7006474283
Otros - ResearchGate
ResearchGate
Otros identificadores (con url)
Linkedin